At least fifty-three(53) people have been killed and twenty-nine wounded when a bus collided with a truck in Western Cameroon, causing a blaze that engulfed both vehicles.

According to the Local Governor, Awa Fonka Augustine the incident occurred in Santohou village and survivors were rushed to hospitals in the Western towns of Dschang and Bafoussam.

He said that twenty-nine people suffered severe burns and had been admitted to nearby hospitals for emergency treatment. 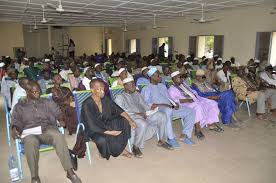