Rivers State Governor, Nyesom Ezenwo Wike has declared that he was transforming the rural areas of the state to provide a conducive environment for Rivers people to live and do business in every part of the state.

Governor Wike stated this during the inauguration of the sixteen point eight five kilometer Rumuji-Ibaa-Obele-Isiokpo Road which cuts across Emohua and Ikwerre Local Government Areas by the former Governor of Jigawa State, Alhaji Sule Lamido.

The Governor who noted that the road had been used by politicians to play politics during electioneering campaigns called on Rivers people to be wary of political parties who made promises but never fulfilled them.

He admonished the people of Emohua and Ikwerre Local Governments not to fall to the antics of the opposition who would soon come to lure them to join their parties with promises that would never be fulfilled.

Noting the deplorable state of the road before its construction, Governor Wike urged Nigerians to hold politicians accountable to enable them keep to their promises.

Inaugurating the road, former Governor of Jigawa State, Alhaji Sule Lamido lauded Governor Wike for opening up the rural parts of the state with road networks.

Alhaji Lamido who observed that it took only a man who had care and compassion for his people to execute the kind of projects Governor Wike had embarked upon in the state for the benefit of Rivers people, opined that the Governor had shown that he had the DNA of the Peoples Democratic Party which stood for care and compassion in him.

He noted that God had used Governor Wike to impact on the lives of the people of Rivers State, saying the people of Rumuji-Ibaa-Obele and Isiokpo are lucky with the road which will enhance easy movement and agricultural activities.

Alhaji Lamido commended Governor Wike for inviting friends and well-wishers from across the country to inaugurate projects in the state, thereby promoting peace and unity, unlike the APC which had balkanized the country like never before in the history of the country.

He enjoined Rivers people to continue to rally round the PDP administration of Governor Wike and desist from ever thinking of joining the APC which he noted had nothing to show in the last five years, having come to power without a plan and programme.

In his remarks, the State Commissioner for Works, Elloka Tasie-Amadi noted the enormous benefits of the road to the people of the area and lauded Governor Wike for fulfilling his promises to the people.

High point of the inauguration was the defection of the leader of the Middle Belt Political Forum in Emohua Local Government Area, Azunda Ikamadu and his supporters from the APC to PDP with the promise of ensuring the success of the party in future elections. 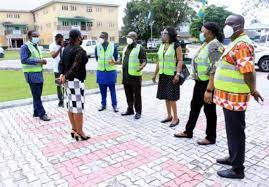