Written by miebaka ikiriko on September 23, 2020

As preparation climaxed for the burial of late Retired Supreme court judge, Justice Adolphus Karibi Whyte, Governor Nyesom Ezenwo Wike has commiserated with the family of the late eminent jurist.

He has also released the sum of fifty million Naira to the family of the late Justice to ensure a befitting state burial.

Governor Wike announced this while briefing members of the family during a courtesy call on him at the Government House in Port Harcourt.

Presenting the Cheque, Governor Wike who was represented by the Secretary to the State Government, Dr. Tammy Danagogo said the Governor had again demostrated his love for Kalabari people in addition to the various developmental projects and welfare support to individuals and organizations.

The Governor described the late Justice Adolphus Karibi-Whyte as a foremost legal Icon at National and International levels and deserved nothing less than a befitting burial, urging the family to be peaceful and deploy the fund to judicious use.

Meanwhile, commendation service for the late Jurist has been slated for Friday September 25, 2020 by ten o’clock in tne morning at Saint Cyprian’s Anglican Church, Hospital Road, Port Harcourt, while the burial proper will hold at Abonnema in Akuku Toru Local Government Area on Saturday Septemberb 26, 2020. 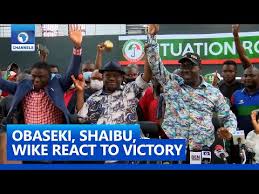