Written by miebaka ikiriko on November 17, 2020

The Rivers State Government says its focus is on winning the number one position on the overall medals table at the forthcoming National Sports Festival due to commence in Benin, the Edo State Capital from the 3rd of December 2020.

Sir Honour Sirawo disclosed that the State Contingent would go into closed camping on the 9th of November 2020 ahead of onward movement to Benin.

He explained that the State Contingent was made up of trained athletes of the state, emphasizing that the state doen not believe in poaching on athletes from other states.

Answering questions, the Permanent Secretary who is also the National Chairman of Sports writers’ Association of Nigeria disclosed that the Sports Institute Isaka has not been abandoned as speculated saying that the State Government is currently renovating thje infrastructure.

He further explaind that the Ministry of Sports is collaborating with the Ministry of Education to revive school sports to identify budding talents for future competitions.

He praised the developmental strides of Governor Nyesom Wike in the area of sports and called for support by all to place the state on the fast lane of development. 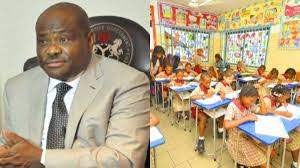