A retired Assistant Superintendent of police, Martin Gbana has called on the Rivers State Judicial Commission of Inquiry to surmon the Chairman, Board of Trustee NIMASA Honourable Asita to explain his role that led to the gruesome murder of one Micheal Abednego, an INEC Adhoc staff during the 2019 gubernatorial election in Ahoada-West Local Government Area.

Gbana while testifying before the state commission of Inquiry on Police Brutality at the Obi Wali International Conference Center in Port Harcourt, said a police officer attached to Honourable Asita shot dead Micheal Abednego at the INEC coalition center in Akinima at about O’clock in the morning on that fateful day.

Gbana who is also the Chief Security Officer to the Chairman, Ahoada-West Local Government Council Stated that he had written several petitions to the Inspector General of police to carry out a comprehensive investigation to unravel the circumstances that led to the gruesome murder of the late Abednego but the petitions were suppressed by powers tha be. 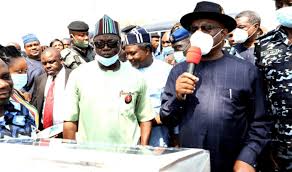