Rivers State Governor, Nyesom Ezenwo Wike has decried the inability of the Federal Government to properly fund institutions and agencies it established to enhance their performance.

Governor Wike who made the assertion when the Chairman and Chief Executive Officer of the National Drug Law Enforcement Agency, NDLEA, Brigadier-General Mohammed Buba Marwa paid him a courtesy visit at Government House, Port Harcourt, noting that lack of adequate funding of government institutions and agencies inhibits their performance.

The Governor who attributed the increase in crime rate to high rate of drug abuse in the country, stressed the need for government at all levels to also deal with the drug scourge squarely with the same way it was tackling banditry and other criminal elements with a view to reducing crime rate in the country.

Noting the ability of the NDLEA Boss to perform in his assignment, Governor Wike however, stressed the need for politicians to give him room to carry out his functions without interference and assured him of the State Government’s assistance to enable the agency achieve set goals.

He also promised to work out modalities with the State Commander of the NDLEA to set up a drug rehabilitation centre for the agency in the state and donated three Hillux vehicles to the agency to facilitate their duties.

Earlier, the Chairman and Chief Executive Officer of the National Drug Law Enforcement Agency, NDLEA, Retired Brigadier-General Mohammed Buba Marwa, who noted the high level of criminality in the country mostly attributed to the illicit consumption of drugs, said he was in the state as part of his familiarization tour of various commands of the agencies across the country.

Brigider-General Buba Marwa who is also the Chairman, Presidential Advisory Committee on the Elimination of Drug Abuse said the agency was all out to deal with drug consumers to reduce supply of drugs as well as arrest offenders across the country, and lauded the State Governor for his efforts to curtail the menace.

The NDLEA Boss also appealed to the State Government to assist in the setting up of a drug rehabilitation centre in the state, a drug control committee and membership of the agency to be part of the State Security Council to enable it continually brief the Federal Government of the level of drug use and crime. 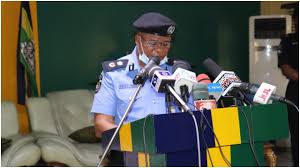