APPEAL COURT IN PORT-HARCOURT THROWS AWAY APPEAL CONTESTING SACK OF ALL LOCAL GOVERNMENT COUNCIL CHAIRMEN BY THE RIVERS STATE GOVERNMENT.

The Appeal Court sitting in Port Harcourt has struck out the appeal against the Rivers State Government, Rivers State Independent Electoral Commission, RSIEC and others for sacking of the twenty three local government council chairmen during the May 2015 election

The lead Judge, Justice Tan Yusuf Hassan in her ruling said there was no proper notice of appeal found in the record of the court as such, the case cannot be heard and struck out the case

Speaking to Journalists outside the court room, counsel to the Rivers State Government and RSIEC, Echesona Etiaba, SAN said the Judgment was in their favour due to their preliminary objection filed.

Also speaking, counsel to the appellants, Mike Wodu holding brief for Sabatini, SAN expressed dismay over the judgment stating that they will get back to their clients on the next line of action.

It would be recalled that the twenty three local government council chairmen elected in 2015 under former Governor Rotimi Amaechi’s administration were removed from office by Governor Nyesom Wike during his first tenure in office and the affected persons approached the court for alleged illegal removal. 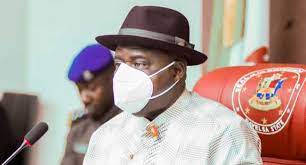 TUC SECRETARIAT COMPLEX BUILT BY THE RIVERS STATE GOVERNMENT TO BE INAUGURATED TODAY.