Report reaching our News Desk has it that there was sporadic shooting at the Okuru/Abuloma axis of Port Harcourt.

According to the report, the cause of the shooting is yet unknown.

Sources close to the area told our reporter that the shooting may not be unconnected with the feud between Okuru-Ama and Abuloma over land dispute.

Reports say an Abuloma Community-boy was seriously wounded and rushed to a nearby hospital.

Meanwhile, Army and Police team have been drafted to the scene to quell the crisis.

KOGI STATE COMMAND OF THE NIGERIA SECURITY AND CIVIL DEFENCE CORPS HAS DETAINED SOME OF ITS OFFICERS ON DUTY WHEN FIVE SUSPECTS ARRESTED FOR ILLEGAL OIL BUNKERING ESCAPED FROM DETENTION. 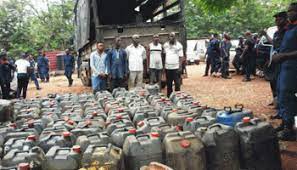