In a good will message from  Government House in Port Harcourt, Dr. Banigo, described Justice Wike as an erudite and compassionate Judge who had continued to be an exponent of positive behavioural change in the lives of youths across the state, with her ‘Riv-Ethics’ programme on radio.

According to the Deputy Governor, Justice Wike is not only an epitome of beauty and grace, but has contributed immensely to the success story of the Governor Wike led Administration.

Dr. Banigo prayed the Almighty God to continue to bless, guide, protect and keep the wife of the Governor in good health.

GOVERNOR WIKE HAS ACCUSED FORMER NIGER STATE GOVERNOR, DR. MU’AZU ALIYU OF BEING A MOLE OF THE RULING PARTY, APC IN THE PDP 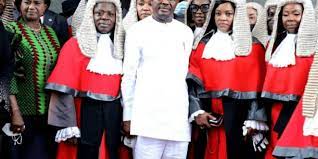