He is facing 18 counts of racketeering, corruption. fraud tax evasion and money laundering

But questions emerged about the deal months after it was signed with some critics, saying the government should have spent the money on fighting poverty.

Mr. Zuma was South Africa’s president from 2009 until 2018 when he was forced to resign after a vote of no confidence

Today, crowds gathered outside the courthouse in Pietermaritzburg city in Kwa Zulu Natal province to cheer on Mr. Zuma who still enjoys some popular support.

THE RE-ELECTED CHAIRMAN OF AKUKU-TORU LOCAL GOVERNMENT COUNCIL, ROLAND SEKIBO PROMISES TO ENSURE ALL THE APC DEFECTORS TO PDP WOULD BE GIVEN EQUAL OPPORTUNITY. 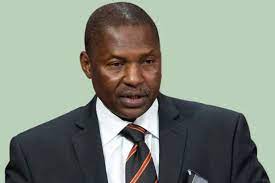