MALAYSIA SAYS IT WILL SUMMON CHINA’S AMBASSADOR AFTER 16 CHINESE MILITARY AIRCRAFT FLEW OVER DISPUTED WATERS OFF ITS EASTERN STATE OF SARAWAK.

Malaysia says it will summon China’s ambassador after sixteen Chinese Military aircraft flew over disputed waters off its  Eastern State of Sarawak.

Fighter jets were Scrambled to intercept the transport planes on Monday after detecting  suspicious  activity over the South China Sea.

Malaysia’s Foreign Ministry described the Manoeure as a serious threat to national sovereignty.

China, however said its aircraft had abided by international law.

Malaysia, the Philippines, Brunei, Taiwan and Vietnam all contest China’s claim to almost all of the South China Sea.

The row has rumbled on for decades, but tensions have increased in recent years.

SIR SAMPSON FIBERESIMA, THE GENERAL MANAGER OF RIVERS STATE BROADCASTING CORPORATION RESTATED THE CORPORATION’S COMMITMENT TO SUPPORT THE SAFTY OF MOTHERS AND A BETTER FAMILY. 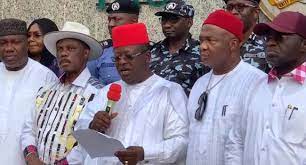