SENATE PASSES THE HARMONIZE PIB DESPITE THE HUE AND CRY OF THE NIGER DELTANS AND NIGERIANS AGAINST THE 3% RECOMMENDED FOR THE OIL HOST COMMUNITIES.

The Senate yesterday passed the harmonize PIB despite the hue and cry of the Niger Deltans and Nigerians against the three percent recommended for the oil host communities.

This was sequel to a Flat Consideration and adoption of the Conference Committee report laid before the Senate Plenary by the Committee Chairman, Senator Abdullahi Yahaya Abubakar of the Kebbi North who is also the Senate leader.

Our National Assembly correspondent, Nyeke Roy, reports that the report which was quickly adopted and voted in favour as soon as the Committee Chairman finished the presentation also adopted the thirty percent frontier funding among others.

It could be recalled that the committee report was submitted yesterday in plenary but was stepped down for today. 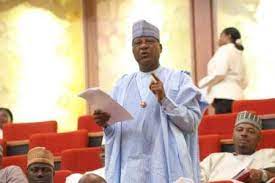