A middle aged man identified as Mr. Patrick Markson allegedly committed suicide after killing his wife in their residence in Yenegoa Bayelsa State.

According to reports, the late Marksonm who was a civil servant with the Yenagoa Local Government Area, allegedly hit his wife’s head with a sledge hammer while she was deep asleep and watched her bleed to death.

The forty-six-year old man thereafter drank a poisonous substance suspected to be an insecticide and lie on the same bed closed to where his dead wife was in their home at Odede Street off Tombia-Amassoma Road in Yenagoa.

Reports say the elder sister to the late Woman said her sister was a gentle lady that had no time for problem.

She explained that they had marital issues but she has often spoken and settled both of them as husband and wife.

The deceased left behind six children of whom the eldest is a two hundred level student.

The Bayelsa State Police Command confirmed the incident as the remains of the couple had been deposited at the mortuary. 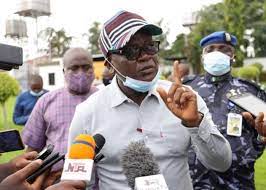 AT LEAST TWO PERSON ARE REPORTED DEAD AND ONE SERIOUSLY INJURED AFTER GUNMEN ATTACKED KABORI AND LOYO COMMUNITIES IN GOKANA LOCAL GOVERNMENT AREA. 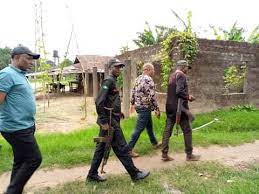