A Bill to stop practices which forbid women from sharing in family property has been presented before the Rivers State House of Assembly for consideration.

Presenting the Bill on the floor of the House, the member representing Obio/Akpor State Constituency Two, Michael Chinda explained that the purpose of the Bill was to check discrimination against women in the society.

Presenting the Bills, the Majority Leader, Martins Amaewhule, explained that the purpose of the Bill on Integrity and Accountability was to provide a legal frame work to fight corruption in the civil service.

According to him, the Bill is also expected to promote accountability and good governance in the State.

The House leader also explained that the Housing Scheme for Judicial Officers Bill 2021 was aimed at empowering the Rivers State Government to provide life long accommodation for Judicial Officers of Rivers origin, as part of their terms of employment so as to enhance their performance and living conditions.

The third executive Bill is to establish an institute for the training and retraining of Judicial Officers, including those from the Customary Courts.

The Initiative, according to Amaewhule, would help to improve the knowledge and competence of Judicial Officers.

Our Assembly Correspondent reports that the Speaker ikunyi Owaji-Ibani  who had earlier read the correspondence from Governor Nyesom Wike transmitting the three Executive Bills, gave the proposed laws, including the Private ember Bill sponsored by  Chindah.

AN EARTHQUAKE IN CHINA’S SOUTHWESTERN PROVINCE OF SICHUAN HAS LEFT AT LEAST THREE PEOPLE DEAD AND SIXTY INJURED YESTERDAY. 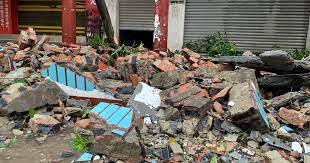