Written by miebaka ikiriko on November 1, 2021

A Human Right advocate, Higher King has joined other well-meaning Nigerians to condemn the invasion of Justice Mary Odili’s Abuja residence as tromp up charges.

Higher King described the invasion as a shame saying that the invasion is an indictment on judicial officials without observing due process and diligence.

He described such invasion as a calculated attempt to ridicule the judiciary which according to him is not good enough for the corporate image of the judiciary of Nigeria.

Speaking further, he identified a credible opposition as strategic for good governance and expressed the hope that new PDP leadership would provide the needed opposition to engender an egalitarian Nigerian State.

Answering question, Higher King opined that an apology by Federal Government that the executive of Ken Saro Wiwa and eight other Ogoni men in November 1995 would pacify fray nerves but emphasized that pardon or exoneration makes no difference explaining that section 175 subsection one of 1999 constitution backs pardon than exoneration and called for understanding.

He regretted that the novelist and environmentalist did not commit any offence to merit execution but regretted that without due competence of the tribunal of the Ogoni nine were executed without the option of appeal. 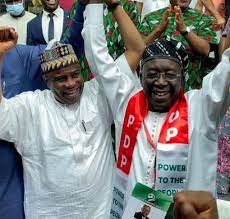